Information in this article provided by nicod98 from Squier-Talk.com

There is a lot documentation about the Squier Stratocaster on the internet; however, the Telecaster is under documented. The information in this article will hopefully shed some more light on the Affinity and Standard Telecaster models from this era. There are many holes in this article since many things are not (or hardly) documented.

The "Standard Telecaster" dates back to 1990 under various part numbers. The "Telecaster" begins life in 1984. For the purposes of this article the the focus will be on Squier Telecasters starting 1996.

During this time, a version of the “Standard” Squier Telecaster was produced in Mexico (013-2302). It had a top load bridge and the dreaded hexagonal tuners. It was more or less a cheaper hardware version of the Fender MIM Standard telecaster. There are also Korean telecasters from around 1996/1997 (VN6/VN7-serials) which overlap with the Mexican Squiers.

In the 1996 mid year price list, the ProTone Telecasters were introduced. This series is considered by many to be among the best Squier guitars built. It was available as a Fat Tele and as a ‘69 Thinline.

Unfortunately, the ProTone Telecasters were in direct competition with the Fender branded guitars, which was hurting sales. To protect the brand against internal competition, it was decided that Squier guitars had to become cheaper and lower in quality. The ProTone was discontinued in 1997.

When the ProTone series was discontinued, the first steps in the modern Squier history started. In 1997 the first Affinity Teles were introduced. Two years later, a new Squier Standard model followed. They were produced in China and Indonesia, respectively.


The early days of the Affinity

In 1996/1997 Fender ordered Squier guitars from China for the first time. All previous models were made in Japan, Korea, Mexico, and a rare US model.

The Chinese Affinities of this era are regarded to be of good quality when compared to either the Mexican or Korean models. These Affinity telecasters had the following specifications:


Fender protected the “Telecaster” name with a “Tele” abbreviation on this model. A practice still going on today with the cheapest models (Bullet and Affinity). Up until around 2000 the “TELE” designation is in a non-fat(bold) font.

Even though not listed any price list or documentation there appears to be at least one batch in a very nice baby-blue color. During the early days of the Affinity, the pricelist shows the same colors over and over, but this color is never on the list.

(The tele in the picture above has been modified into a Nashville-configuration. Click to enlarge)

Affinities from this era though do have some issues; different angle of the bridge pickup, far from perfect ferrule drilling location (usually close, but sometimes it is really bad). But for China it was still early days of large-scale guitar production on a world-wide scale, and all in all, the quality was pretty good. The odd angle seems to be more or less constant up until around 2006. In 1998 the model remained largely the same with the serial number changed to the back of the headstock.

One year later (in 1999) we see the thinner body and the top-load bridge for the Affinity being introduced, with production started in 1998.

The 1998 and 1999 Affinity can be found with a "CY" serial prefix. They appear to be a continuation of the other Yako-made Affinity teles. These seem to be thinner with a top load body like the description above. But there are also 1998 and 1999 models with the "CD"serial prefix, with a top load body (for CD99) with 6 barrel-bridges (instead of block saddles). The CD98 seems to be full thickness string through. It's unclear if these are Yako-produced or not. In fact, not much is known about this “CD” Affinity.

Before we can continue the Affinity story, let's introduce the Squier Standard Telecaster.

1999 is the year where the history of the Modern “Standard” begins. Although uncertain, it appears these are the first guitars Fenders buys in Indonesia. It is also the first year where the “Standard” designation is put on the headstock. The “TELECASTER” name is visible in a thin font.

The 1999 price list mentions a “top-load” bridge, while in fact, it was a dual-load bridge: both top load an string-through is possible, and the string ferrules were installed.

The 1999 new Standard telecaster has the following features: In 2000 the Standard started another transformation. During the year there are three different versions of the Squier Standard Telecaster.

One difference can be found in the “TELECASTER”-part of the decal. The 1999 and earliest 2000-version of the Standard telecaster has the “thin” font for the word “TELECASTER”. The second and third version from 2000 (and all years since then) have the “thick” font.

Another difference is the bridge itself. The 1999 and two versions in 2000 (version 1 and 3) have a 6 barrel bridge. The second version from 2000 and versions from 2001 onwards have block saddles. 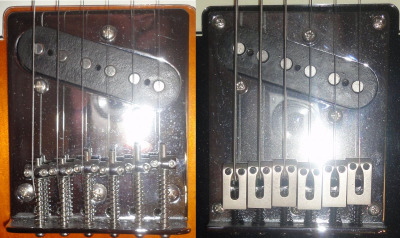 In 2001 the transformation got finalized, and this resulted in a Squier Standard, that really could be called a “Standard” telecaster.


So in essence we have these versions of the Squier Standard Telecaster:

Because of the limited time the 1999/2000 Indonesian Standard was produced, the following colors are rather rare:

When these colors were discontinued a very seventies looking color was introduced: 592 Walnut Satin (2004-2006).

It's somewhat surprising how short a time that the maple fretboard Standard was made in Indonesia. The first were produced in 1999, and during the year 2000, the model was completely changed. This seems a bit odd. So was the Indonesian Standard tele not selling enough units? Was that the reason for the maple vs rosewood fretboard swap between the Standard & Affinity?

Back to the Affinity

Somewhere in 2000 the Affinity got a maple fretboard (without skunk stripe). The hexagonal tuners remain in place, and all seem to have a serial number prefix of "CY". As stated earlier the Affinity telecaster had an odd angle for the bridge pickup. This was certainly still the case in 2003, 2004, 2005 respectively as seen in the image below. Around 2006/2007 the odd angle ”problem” was rectified.

An oddball Affinity tele, or a happy coincidence?

A 2000 Affinity was located in a pawn shop. No big deal, you might say, but this one is a mix of features, similarities and contradictions: 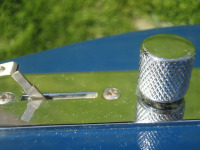 Here are few hypotheses about why Fender made the Affinity tele in Indonesia as well as in China (These are all personal opinion):

We have a very rich backstory for the Japanese Squiers, the move to Korea (including the “plywood”backstory, production in Mexico, temporary production in the USA). While the Affinity is quite possibly one of the highest selling Fender series guitars worldwide there isn't much information published about their history. The hope is this article has helped to fill in some of these gaps.

The early years of the history of the “modern” Standard and Affinity teles is more complicated than one would think. In this article, many small differences and oddities have been uncovered. No doubt this will cause many more questions to be asked.

If anyone would like to add additional information, you can add comments below or to the original thread on Squier-Talk.